- a musical performance by Kyung-Hwa Ryu 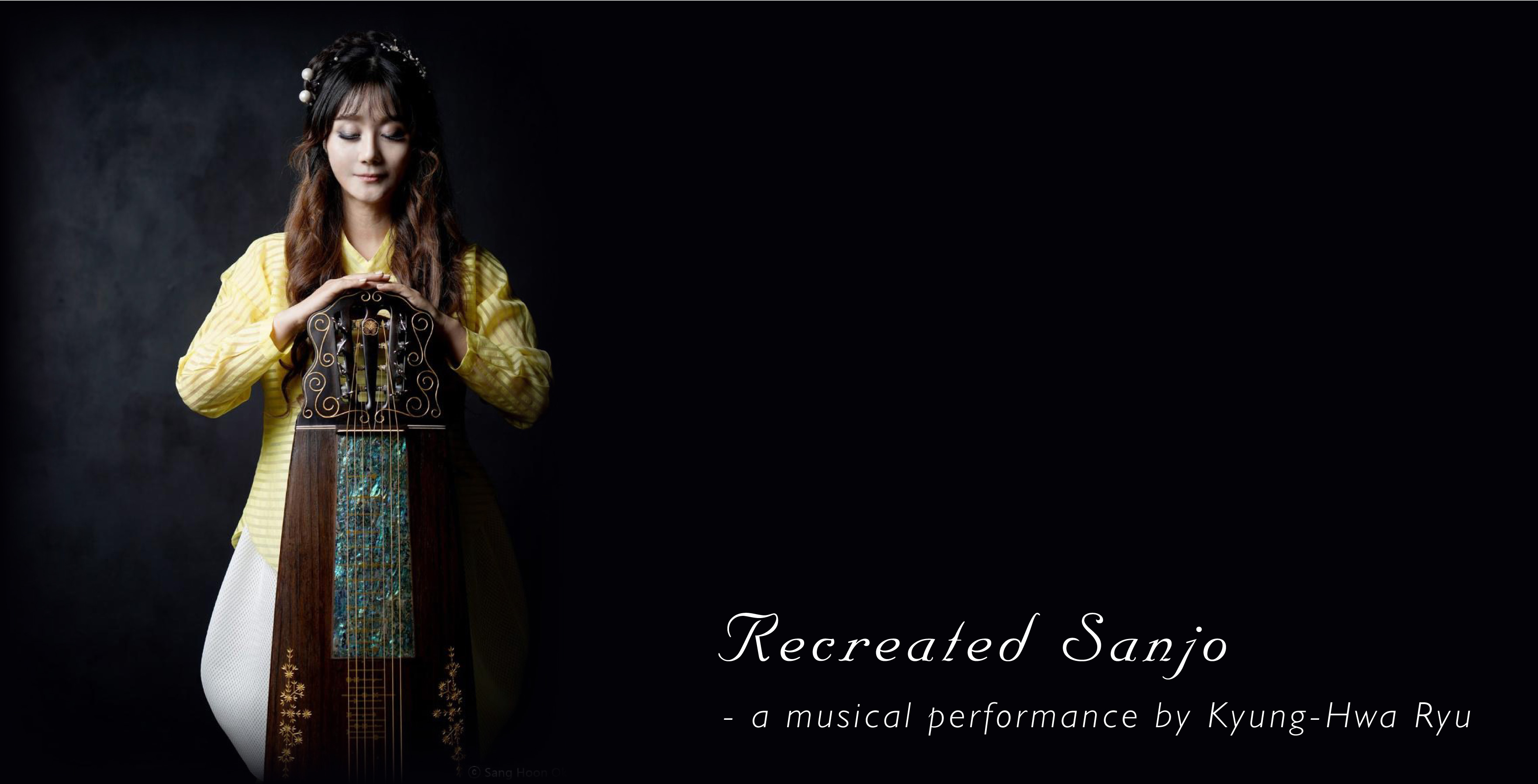 Sanjo, literally meaning 'scattered melodies', is a style of traditional Korean music, involving an instrumental solo accompanied by drumming on the janggu, an hourglass-shaped drum. The art of sanjo is a real crystallization of traditional Korean melody and rhythm which may have been handed down by rote generation after generation. The drummer who beats the janggu also makes chuimsae (exclamations) in order to please the audience. The audience can also express their excited feeling with chuimsae while listening to sanjo. Like pansori, chuimsae plays an important role in sanjo. Chuimsae connects the musician and audience during a sanjo performance. Almost every Korean traditional musical instrument is used in sanjo: gayageum, geomungo, daegeum, haegeum, piri, taepyeongso, ajaeng, danso.

Sanjo was supposedly developed around 1890 by Kim Chang-jo (1865–1920) for the gayageum. Thereafter, it was expanded to include other traditional Korean instruments, including the geomungo and Korean flutes. Its early development was informed by other genres of traditional music, including pansori, sinawi, and the performances of Korean shamanism. Sanjo is traditionally identified as a form of minsogak, or folk music.

Sanjo rhythm is considered so important that it is divided into movements. This song breaks the frame of the rhythm and consists of rhythms that are not used in sanjo, i.e. new rhythms, for each movement. The electric guitar plays a role introduces a new spatial sound with various rhythmic changes.

As an artistic director who awakens the sense of innovation and convergence based on tradition and traditional music, Kyung-Hwa Ryu work changes Korean traditional music of this era and presents the future Korean music. Particularly noteworthy is her attempt to expand and evolve music by reviving iron cash, which was almost extinct!

About the artist: Kyung-Hwa Ryu

Kyung-Hwa Ryu, a specialist of traditional Korean rhythms, deploys her multiple talents as composer, ensemble director and instrumentalist covering the range from pure Korean tradition to world music, from improvisation to creation. Born in 1968, Kyung-Hwa Ryu, entered the world of Korean traditional music at the age of four when she began to take dancing lessons.

She trained at the National High School for Korean Traditional Music, at Seoul University and at the National University of the Arts, and she has a doctorate in musicology from Hanyang University. She plays the zither geomungo and performs various traditional dances, but it is in the art of the cheolhyeongeum and percussion instruments that she has, over the past few years, established her reputation as a performer and mediator between Korean traditional music and fusion music.

She studied with many Korean masters: Kim Yong-bae for percussion, Bak Byeong for the shamanic ritual ssitgimgut, Kim Jeong-hui and Kim Myeong-dae for the byeolsingut; Kim Jeong-su introduced her to the rhythms of court music while Lee Tae-baek taught her folk rhythms and Jeong Hwa-young how to play the drum which accompanies the pansori.

Kyung-Hwa Ryu to improvise with Kang Tae-hwan and was initiated in the Indian tabla by Pandit Divyang Vakil. Lastly, Seong Chang-soon, the famous master of the pansori drama Simcheong-ga, taught her the compositions of Kim Yeong-cheol, the creator of the cheolhyeongeum, making her an heiress of the second generation of the School of Kim Yeong-cheol. She is also a composer and directs the E-do world music ensemble.

Kyung-Hwa Ryu has several accolaes to her credit: “Promising Artist” from the Korean Ministry of Culture, Sports Tourism (2002); “Artist of the year” with her first cheolhyeongeum recital (2004); KBS Grand Prize for traditional music in the category of stringed instruments (2011), thereby contributing to the recognition of this largely unknown instrument, even in Korea. Lastly, her work Dream of the Great King Sejong allowed the Seoul Metropolitan Youth Traditional Music Orchestra to win the prize for the Best interpretation at the Grand Prize for traditional music Creation in 2014. In the same year, the Korean magazine NewMaker awarded her the prize for innovation.

Awards:
• 2002 - “Promising Artist” from the Korean Ministry of Culture, Sports and Tourism.
• 2004 - “Artist of the Year” from the Arts Council of Korea.
• 2011 - “Grand Award for Traditional Music in the Category of Stringed Instruments” from the 'Korean Broadcasting System'.
• 2014 - “Innovation Award” from the monthly magazine ‘NewsMaker’.

The cheolhyeongeum is a hybrid instrument resulting from a crossing of the guitar and the fretted zither geomungo. It was invented between 1943 and 1945 by Kim Yeong-cheol (1920-1988), a traditional jultagi artist and great connoisseur of Korean folk music. The cheolhyeongeum is shaped like a rectangular guitar. Its short neck extends onto the sounding board and has 24 frets. The instrument is placed on its back and played like a traditional zither. Its eight metal strings are plucked with the right hand with a small stick of acrylic or bamboo (suldae), while the left hand adjusts the pitch by sliding a kind of wooden and acrylic bottleneck (nongok) over the strings, as on the strings of a slide guitar or an Indian Chitra veena. This very flexible playing technique (nonghyeon) allows for the production of all of the ornamentation that is specific to Korean traditional music. The strings, made of tin and copper, are held at a short distance from each other, allowing for great virtuosity and they produce a sound which is both ample and metallic, very exotic for Koreans who are used to the round and hushed timbre of zithers with silk strings. The organization and the tuning of the strings, with a register that extends over more than four octaves (Bbl to F4).

Kyung-Hwa Ryu plays an instrument that she herself improved in 2015. Its slightly arched sounding board symbolizes the sky and its flat back represents the earth. It has 25 frets instead of 24. It is made of paulownia wood, like all other Korean traditional stringed instruments. Kyung-Hwa Ryu is credited with reviving this instrument which was on the verge of extinction!

The cheolhyeongeum is accompanied by the hourglass drum janggu, the most widely used percussion instrument in Korea in both classical and folk music. The left membrane, struck with the bare hand, is made of thick cow, horse or stag leather; the right one is higher, made of dog or horse skin and struck with a bamboo stick. The percussionist diiscreetly accompanies the solo instrument, providing it with rhythmic sequences and encouraging it from time to time with little exclamations (chuimsae).

Click on www.inkocentre.org/Virtual_Connect_Infotainment.html on Wednesday, 12 January 2022 at 6.00 p.m. IST.

The link to view the performance will be accessible until Tuesday, 25 January 2022. 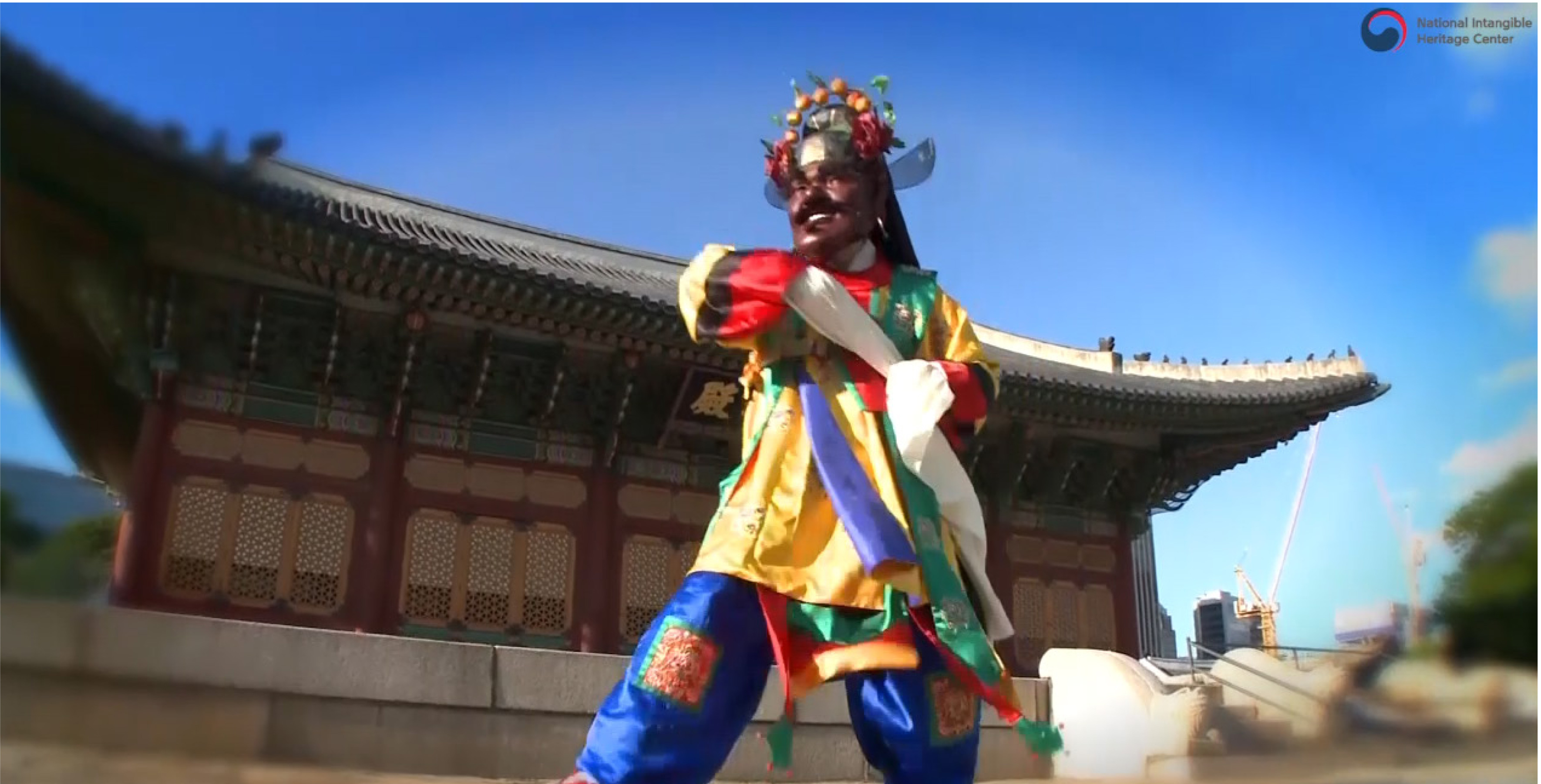 In Episode 6 of the Cultural Heritage Series, we focus on Iri Hyangje Julpungnyu is a piece of instrumental music handed down in Iksan, Jeollabuk-do, depicting the scene of Shakyamuni preaching the Lotus Sutra, at Vulture Peak, Gijjhakuta Hill.

Tune in to https://www.inkocentre.org/the_cultural_heritage_series_episode7.html on Thursday, 27 January 2022 at 6.00 p.m. IST.